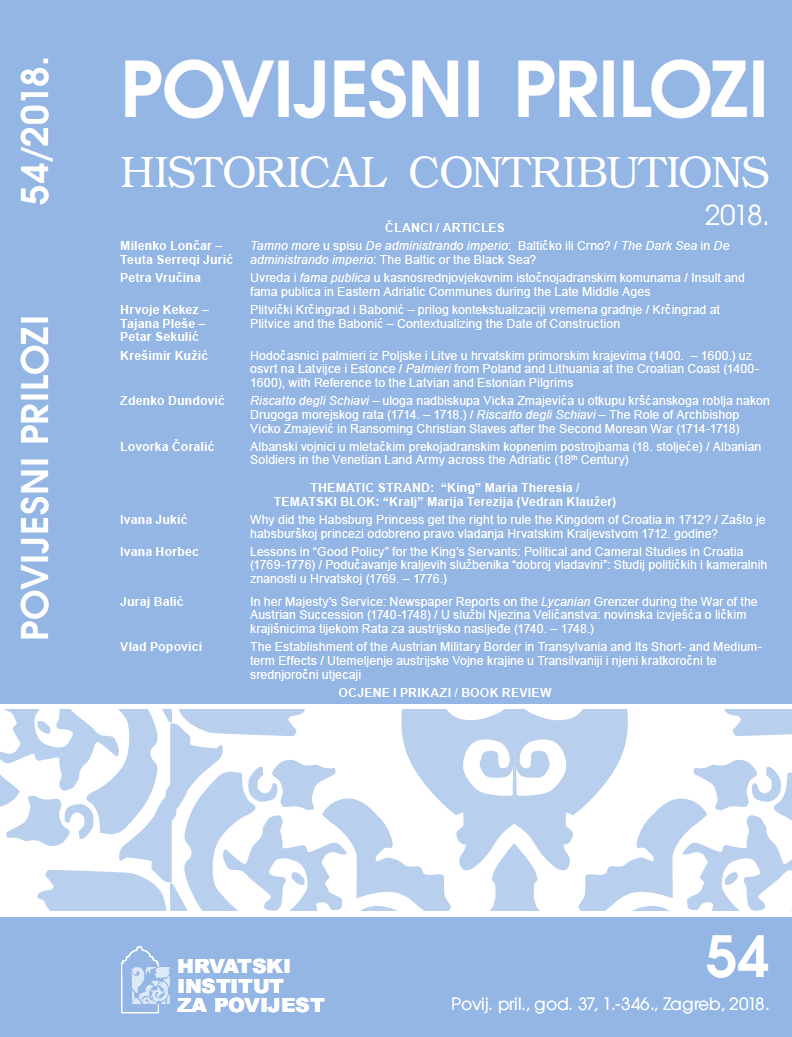 In the De Administrando Imperio the Byzantine Emperor Constantine VII Porphyrogenitus (913-959) differentiates between two Croatias - the Dalmatian or “baptized” Croatia, as opposed to the “unbaptized”, the latter of which is also identified by him using the terms “Great” or “White Croatia”, from where its inhabitants the White Croats moved to Dalmatian Croatia. The original homeland of the Croats is localized in several chapters of the same text, most often using geographic designations such as “beyond Bavaria” and “towards Francia” (chapter 30), or “beyond Hungary, near the Franks and White Serbs, in the Boiki region” (chapter 32). The most precise localization is, however, found in chapter 31, where, other than the stylizations “beyond Hungary” and “towards Francia”, as well as ethnopolitical terms such as Hungarians, Franks, White Serbs and Pechenegs, the author cites the exact distance from the Dark Sea, which amounts to thirty days of travel by foot. In identifying the Dark Sea historiographic research has, until now, mostly been divided on the issue of whether or not the Emperor, using this name (i.e. the Dark Sea), was referring to the Baltic Sea or the Black Sea. Researchers have attempted to get closer to an answer by calculating the number of days needed to get there by foot in stadia or kilometres, comparing that with the shortest modern routes. Correspondingly, they have measured the distance from the centre of White Croatia, Krakow, both to the closest point on the Baltic Sea, the seaport Gdansk, and to the closest point on the Black Sea, the city of Odessa. The calculation favours the Baltic Sea, a fact that is revealed by an example from the 42nd chapter of the same text in which the distance between the Danube and Sarkel, a fortress on the confluence of the Don River, is measured by the same measurement unit. The Arab travel writer Ibrahim Ibn Jakub used a similar measurement when citing the distance between Krakow and Prague. A further argument which would align with the theory that the Emperor uses the syntagm thalassa skoteine in order to describe the Baltic Sea, is the fact that the author calls the Black Sea in the text in three places Pontos. Besides, the White Croats did not have access to the Black Sea due to the fact that their neighbours to the east were the inimical Pechenegs, who controlled those areas. The White Croats’ northern neighbours are not mentioned anywhere in the text, implying that they had an open route to the Baltic Sea, which they could reach in thirty days on foot.